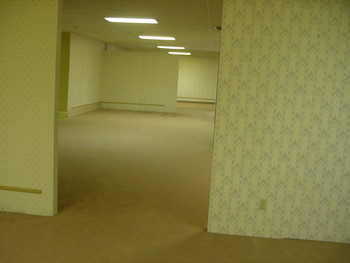 The first picture ever taken of Level 0

.
If you're not careful and you noclip out of reality in the wrong areas, you'll end up in the Backrooms, where it's nothing but the stink of old moist carpet, the madness of mono-yellow, the endless background noise of fluorescent lights at maximum hum-buzz, and approximately six hundred million square miles of randomly segmented empty rooms to be trapped in

God save you if you hear something wandering around nearby, because it sure as hell has heard you
— 4chan
Advertisement:

The Backrooms is an internet meme and quasi-Alternate Reality Game based upon the eponymous Eldritch Location, an infinite series of rooms decorated in mono-yellow wallpaper and moist carpet, lit by fluorescent lights, supposedly accessed when one noclips out of reality. Currently, a KnowYourMeme article

exists documenting the phenomenon and a subreddit

Note Liminal Archives doesn't exclusively deal with the Backrooms and will delve into other things at times. have been made to expand upon the lore.

about a camera operator who finds themself trapped in Level 0, unknowingly stalked by wire-like entities who eventually decide to give chase. The video was given a VHS filter to disguise the CGI nature of the project, and many viewers were impressed with the lifelike camera movements that made the video feel real. The video was later followed by others which turned it into a full Analog Horror series, which seems disconnected from the previous Backrooms-themed wikis.

Another notable video — predating the Kane Pixels series (October 26, 2019) — is Into The Backrooms

by YouTube user Evan Royalty. It also has its own separate continuity from the general Backrooms lore and tells the story of LAPD Police Officer James Richmond responding to a welfare check request from a Timothy Park who's wife Claire Park has gone missing. Rich discovers an open door at the Park residence and requests backup, a Knox answering the call. Long-story-short, Rich falls through a glitch into Level 0 and suffers great emotional trauma from his experience of being isolated and hunted by an entity. He survives to find a way back to reality to undergo rehabilitation. The video was developed through modifications to Grand Theft Auto V.

open/close all folders
Advertisement:
The Backrooms In General
The Kane Pixels Series

Evan Royalty's Into The Backrooms