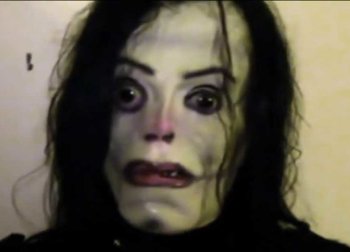 Ayuwoki is one of the latest internet memes revolving around the late Michael Jackson. Ayuwoki is a deliberate misspelling of the lyrics "Annie are you okay?" from Jackson's signature song "Smooth Criminal" which is said to be in tune with the Spanish take on the lyrics. An animatronic of Michael Jackson was made back in 2009, becoming popular after the death of the real Jackson. The video resurfaced again in early 2019 where an urban legend was attached to it saying that it would enter one's room at 3 AM to say "Hee-hee" in reference to the late Michael's vocal riff.

A game entitled Escape the Ayuwoki was released during the heights of the meme.

Escape the Ayuwoki provides examples of: