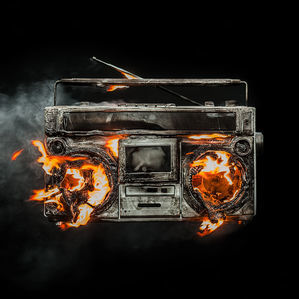 "I wanna be a celebrity martyr/The leading man in my own private drama/the hero of the hour/Daddy's little psycho and mommy's little soldier!"
Revolution Radio, the band’s solid but sometimes unfocused new album, can’t stop looking to the past, to the present, anywhere but the future.
—Alex McLevy

Revolution Radio is the twelfth studio album by Green Day, released in 2016.

In 2012, Green Day was on the verge of imploding. They were in the middle of an ambitious plan to release three albums in one year - the Uno! Dos! Tre! trilogy - which recieved mixed reviews and the lowest sales of the band's career.

In the middle of this, Billie Joe Armstrong had a very-well publicized meltdown while performing on iHeartRadio, where he stopped in the middle of performing "Basket Case" he went on a foul-mouthed rant, smashed his guitar, and flipped the audience off before walking away in anger. The performance wasn't recieved well.

After the failure of the trilogy, which Billie himself admitted was a mistake, the band decided to get back to basics. As such, Revolution Radio was Green Day's most straightforward album since Warning:, lacking the Rock Opera elements from American Idiot/21st Century Breakdown and the overambition from Uno! Dos! Tre!.

The album was largely well recieved by critics and audiences, and debuted at #1 on the Billboard 200. Two of the album's singles - "Bang Bang" and "Still Breathing" - reached #1 on both the Mainstream Rock charts and Alternative Charts.

Followed by 2020's Father of All Motherfuckers.