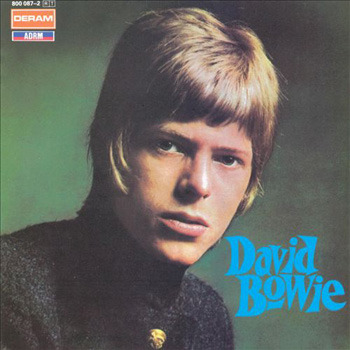 "Don't be afraid of the man in the moon, because it's only me."
"Even though his earliest [Deram] recordings—a jumble of psychedelic pop, vaudevillian whimsy, and stoned children’s ballads like 'The Laughing Gnome'—may seem lightweight compared to his later work (and both he and his fans would more or less ignore it), Bowie’s ambitious attempts to fuse rock and cabaret theatricality were already present, inchoate as they were."
—Sean O'Neal of AV Club, from this article

David Bowie is the debut studio albumnote Not to be confused with his second, also initially Self-Titled Album from 1969, which is now better-known as Space Oddity by David Bowie, recorded from November 1966 through February 1967 and first released in the UK on Deram Records label on June 1, 1967.

A far cry from the British Invasion rock of his previous non-album singles, the record presents an eclectic mix of British music hall, Anthony Newley-style pop, Radio Drama, pop-culture satire, children's music, and neo-Edwardian kitsch. The album also introduces lyrical themes that Bowie would further explore in his later work, including gender non-conformity, apocalypse, the Messianic Archetype, and the treatment of youth and elders as if they were separate races.

Bowie's stint on Deram would not last very long, and Bowie himself wouldn't release another album for over two years after this one, subsequently refraining from performing any songs off of this record live.note He did perform several of its songs for BBC radio later in the decade, and lip-synched a few tracks for his 1969 promotional film Love You till Tuesday. However, the album and other Bowie recordings for Deram saw many rereleases and repackagings in the years following his Breakthrough Hit album, The Rise and Fall of Ziggy Stardust and the Spiders from Mars.

David Bowie was supported by two singles: "Rubber Band" and "Love You till Tuesday", the latter of which later became the namesake for a promotional film Bowie made to court a new record label after Deram dropped him. This film would wind up catching the attention of Philips Records and their subsidiary Mercury, which would lead to the creation of Bowie's next two albums.

Bonus Tracks (2010 deluxe edition):note Excluding other versions/mixes of the above tracks

Come and Buy My Tropes: