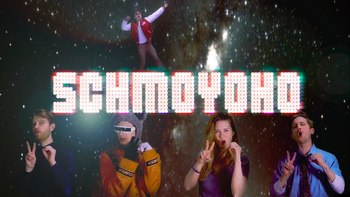 Accent on the yo.note From left to right: Andrew, Michael, Sarah, Evan
Schmoyoho, accent on the yo
Songify your favorite videos
Original songs and musicals
Making the news tolerable
And other stuff too
—The Gregory Brothers, "The Full Schmoyoho Song"

The Gregory Brothers are a comedy music group, also known by their YouTube channel name "schmoyoho

". They went viral in 2009 with the debut of their series Auto-Tune the News, which was eventually renamed Songify the News. They followed up this with tunes "songifying" political debates, movies, and memes. They've also produced original songs, sometimes collaborating with musicians like "Weird Al" Yankovic, Blondie, JonTron, and Roomie.

Tropes applying to The Gregory Brothers:

In "Of Murder & Catfish: Songify the News #8", internet personality JonTron makes an appearance.

In "Of Murder & Catfish: Songify the News #8", internet personality JonTron makes an appearance.