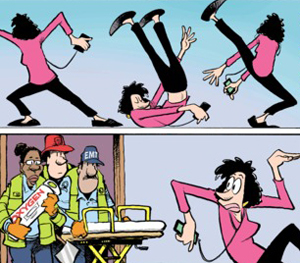 "I was dancing, not having a seizure!"
"Like anybody can tell the difference!"
George: Have you ever seen Elaine dance?
Jerry: [Completely stops what he's doing and looks at George with horror] ...Elaine danced?
George: It was more like a full-body dry heave set to music.
— Seinfeld, "The Little Kicks"
Advertisement:

There's always that one person on the dance floor at a club/party/etc. that thinks they're on par with the likes of Michael Jackson, James Brown, or even Fred Astaire when it comes to dancing, but in reality, they couldn't stay on rhythm to a nursery rhyme if they tried. Oftentimes, this results in said person bumping into objects/people, if not knocking them down outright, stepping on toes, and all around making an idiot of themselves. Such a person will either get mocked for their dancing, or piss off the other dancers for being a klutz. In extreme cases, the offending "dancer" will actually hurt themselves and others, or get physically ejected from the dance floor, if not the venue itself.

You've probably seen countless characters with this trait before. Hell, you might even know someone in real life (celebrity or otherwise) who fits this trope. Sucks At Dancing is a sister trope to I Can't Dance, with the obvious difference being that the character in question legitimately thinks they're a good dancer, instead of reluctantly acknowledging their lack of dance skills. Like I Can't Dance, expect a lot of lampshading, jeering, property damage and/or bodily harm to occur.

A variant of this invokes deliberate Stylistic Suck, where the character isn't that bad at dancing, but deliberately hams it up to make themselves seem worse than they really are. Bonus points if they can actually cut up a rug or two when not trying to make themselves look bad.

Another variant used in shows and movies featuring a cast of primarily Black characters is to either make the token white character as bad a dancer as possible, or have the other characters assume that he can't dance, only to be spectacularly proven wrong.

If the bad dancer in question is also a singer, it can go hand in hand with Dreadful Musician and Hollywood Tone-Deaf. A complete opposite to the Dancing Royalty. Contrast You Said You Couldn't Dance.