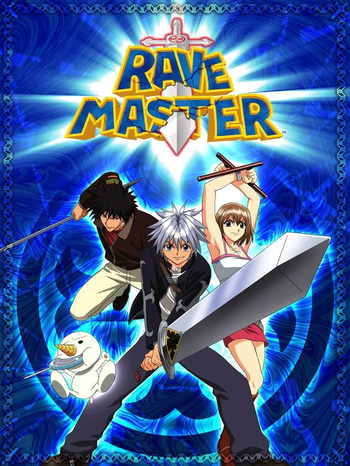 "Quest for glory! Accepting our fate with the power that we own. This is a hero's story, we'll be the greatest the world has ever known!"
—Opening theme to the English dub
Advertisement:

Once upon a time, an evil force known as Dark Bring was plaguing the planet, turning hearts twisted and corrupt with its dark power, which in turn sparked wars and turmoil. One man, known as the Rave Master and armed with special powers known as Rave used to counter against the Dark Bring, attempted to stop the madness by tracking the Dark Bring's source and destroying it once and for all.

He... didn't quite get the job done, for as soon as the Rave Master thought victory was his, the source of the Dark Bring proceeded to explode, taking one tenth of the known world's landscape with it—not to mention losing most of Rave's powers in the process.

Jump ahead fifty years on a little-known bit of land called Garage Island, where Haru Glory catches a strange-looking "dog" called Plue while out fishing. One thing leads to another before he's deemed the 2nd Rave Master whose job is to bring peace to the world and save it from the lingering threat of the Dark Bring and those who wield its powers for their own selfish and destructive ends. He gains allies along the way and overall has one heck of an adventure.

Known in Japan simply as RAVE, this was the first major manga to bring success to eventual Fairy Tail creator Hiro Mashima. It was serialized in Weekly Shonen Magazine from 1999 to 2005 and compiled into 35 volumes. The manga was adapted into an anime in 2001 titled Groove Adventure Rave, which ended in 2002 with 51 episodes that only cover the first third of the story before its premature cancelation. While Hiro Mashima has continued hoping his series will one day get a second chance at adaptation, this stumble has put a big damper in things.

In the United States, the anime was severely edited and aired on Toonami, and didn't see the light of day again for a few years until Sci Fi Channel picked it up as part of their Ani-Monday block. It did feature many Californian voice actors who would go on to better projects, mostly under VIZ Media or Bandai.

The manga as well as the anime was owned by Tokyopop, who dropped the series in 2009 without warning with only three volumes left to go. Thankfully, Del Ray and later Kodansha Comics (who are the holders of Mashima's other series Fairy Tail) picked up the series and released the series from beginning to end. They published the final three books as a single volume.

Though Rave Master ended years ago, it received a fun little revival in Mashima's later work, Fairy Tail. Not only are several characters designs and elements lifted directly from Rave, Fairy Tail eventually featured a Crossover Omake called Fairy Tail x Rave, which was adapted into an Original Video Animation in 2013. Mashima has since continued the tradition in his third major manga, EDENS ZERO, which draws heavily from both series. Rave Master made another return in crossover form on October 16, 2019, this time as a 10-chapter manga series with both Fairy Tail and Edens Zero, titled Mashima HERO'S.

This manga and anime provides examples of the following tropes: