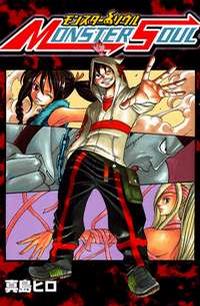 Welcome to Elvenland, a fantasy world where monsters co-exist with humans. However, as you can imagine, tensions on both side flare more often than not, leading into an ongoing battle between the two (Humans are afraid of the monsters preying on them, while the monsters are afraid the humans will hunt them down).

Despite this, a group of monsters, The Black Airs, a ragtag bunch said to be the strongest monster force, have made sure both sides are under control and work to find a peaceful solution to the conflict. Their members includes Aki (a werewolf), Tooran (a half-human sand golem), James (a Frankenstein's monster-ish guy), Mummy (a, uh, mummy), and Joba (a odd, onion-looking monster).

Such is the story of Monster Soul, a short, two-volume manga from Hiro Mashima, the creator of Rave Master and Fairy Tail. It has been licensed by Kodansha Comics and is available for purchase in English.

Monster Soul include the following tropes: