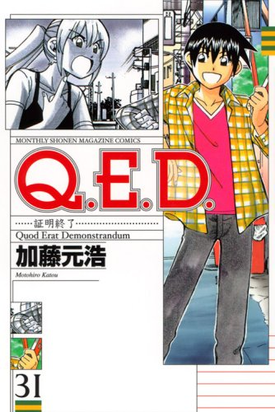 "Quod Erat Demonstrandum" note "What was to be shown"

Kana Mizuhara is an Ordinary High-School Student who is at an arcade one night with a friend when she comes to the rescue of a fellow classmate. The classmate, she comes to learn, is Sou Touma: a MIT-graduate Teen Genius who came to Japan to attend high school like a normal student. Of course his lack of social skills and his encyclopedia knowledge on a variety of advance subjects make him far from normal.

When her friend receives news her father has died, Kana drags Sou along to console her only to learn her father (a police detective) is on the scene...and Kana's friend's father was murdered.

Realizing that Sou has noticed something about the murder, Kana forces him to help to find information and clues to the killer's identity. In doing so the two form a genuine friendship and the series follows them as they repeatedly stumble into crimes or are ask to investigate mysteries.

Q.E.D. Shōmei Shūryō, usually shortened to Q.E.D., is a manga series written by Motohiro Katou and first began serialization in July 1997 and still going strong to this day. Initially published in Magazine Plus, the series is now featured in Magazine R under the title Q.E.D. iff following the Magazine Plus publication's cancellation.note Fun fact: it was literaly the 99th chapter before the magazine cancellation, technically making the first of the new series the 100th chapter.

One of the most notable aspects about the series is its taking advantage of Sou's status as a Teen Genius; every chapter has him explaining in (accurate) detail one of number of advance subjects revolving around mathematics, cosmology, engineering and a whole host of other subjects as related the current case. This makes for a double-edged sword as translating the manga proves difficult leading to slow releases in English and other languages.

Since the manga's launch, two more series by the author have been released and are ongoing: C.M.B. and Rocket Man. The first of the two, C.M.B., follows a young man who is revealed to be Sou's cousin and his friend, revolving around history and archeology as opposed to science. Rocket Man is a revolves a teenager with the skills of a trained doctor and his friend, as he investigates the mystery of his missing memories focusing as action-adventure with elements of Spy Fiction. Needless to say the author loves this dynamic. note  While its long been establish the first two series are connected, Rocket Man has yet to be featured or feature a Crossover with the other two. Though there's no reason to assume it doesn't.

"We have supplied tropes for the following case in the manner which you asked us to:"