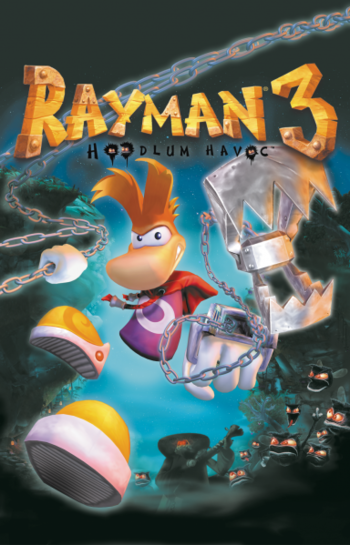 Ready for Action!
The Crossroads of Dreams was a place of heavenly bliss where calm, happiness and the joys of life seemed to reign forever. Some of the inhabitants even began to feel that the hours and days passed a little too slowly.
Then, one day, a red Lum transformed himself into a cantankerous little ball of fluff. His name was André and he wanted to conquer the world. To this end, André turned the other red Lums into black Lums, then they all swarmed off to steal the animals’ hair and weave costumes for themselves.
Advertisement:
Thus was born the army of Hoodlums – raring to spread their mischief and idiocy throughout the the Crossroads. No-one could put a stop to them! So guess who had to interrupt his siesta to go and sort things out?
— Manual Synopsis

Rayman 3: Hoodlum Havoc is the third game in the main Rayman series, and is the only one not to have been headed by the series' creator, Michel Ancel. It is available for the PlayStation 2, GameCube, Xbox, Xbox 360, PC, Mac OS X, Mobile, Game Boy Advance, and N-Gage.

The gameplay is largely the same 3-D platforming that Rayman 2: The Great Escape had, but with more emphasis on power-ups, combat and mini-games. The games tone is also considerably Lighter and Softer than the previous game, with the characters being much more wacky, wisecracking and self-referential than before, going into outright fourth wall busting and shout outs to not only the previous game, but also other series as well. This is the first (and so far, only) Rayman game that features American voice actors to play the characters.

A Game Boy Advance and N-Gage side-scrolling version of Rayman 3 was also produced, but it has very little in common with the console version save the appearance of Andre and the occasional hoodlum, instead being more of a Interquel bridging the gap between Rayman 2: The Great Escape and this game (even if the three don't exactly line up very well). A sequel to the handheld version, also on the GBA, called Hoodlums' Revenge, was later produced. That game more accurately represented the console Rayman 3 through an isometric viewpoint which provided gameplay in 3 dimensions. The Java mobile and Symbian versions are short, original 2D platformers, not unlike the GBA version.

The game's plot concerns the uprising of the titular Hoodlums - red lums that have become corrupted into Black Lums. The Hoodlums have created an army to take over the world led by their leader, the superintelligent Andre. It's up to Rayman to stop them - only for Globox to accidentally eat Andre, leading to Rayman's quest becoming taking Globox to the doctors so that he can release Andre from Globox's stomach and destroy him for good, preferably before Andre eats his way out of Globox.

An HD Updated Re-release was made for PlayStation Network and Xbox Live Arcade, featuring some graphical enhancements and achievements support. It's missing the song "Madder" from the previous console versions, though.

Rayman's next appearance was in the party game Rayman: Raving Rabbids. The next Rayman platform game, 2011's Rayman Origins, marked the return of 2D in the series.