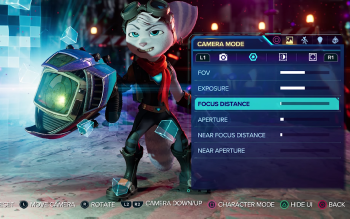 Another Ass-Kicking Pose for my album!
Advertisement:

It's not uncommon for many modern videogames to start shipping with a specific bonus feature; the ability to take photos in-game by pausing all movements, hiding the HUD and letting the player move the camera freely, usually in a third-person perspective. This can vary from a basic screenshot editor to a functional gallery menu that lets you adjust the camera angle and apply flares or filters.

It became very commonplace in The New '10s to add this feature into games, due to the rise and normality of using social media and smartphones with ever-better camera quality and sharing those snaps around, so getting into photography became an easier hobby than ever before; those that are shutterbugs in real life will likely find a Photo Mode that allows you to capture an Unflinching Walk, Scenery Porn, Hit Stop or a discovered secret in an easy and natural way from any angle an appealing proposition. A series of photos can even be combined into Machinomics; telling a narrative with videogame pictures. Before Photo Mode became a staple for videogames, if the game settings had an option to disable the HUD, players would do so to take cinematic screenshots. And most early consoles didn't even have a dedicated screenshot button, so if it wasn't a game feature, you had to use some workarounds to take any semblance of a photo.

It can be accessed in different ways; using a designated hotkey combination, an option in the pause menu, specific location use, within replay footage, or by using a camera (or smartphone) item in-universe.

Note that a Photo Mode is a designated in-game system added specifically to take and modify pictures with more convenience, there's more to it than being a Free Look Button with the ability to capture images.

Depending on restrictions, the Photo Mode has the potential for a bit of cheating if you can pause the game and take your camera out to scout the area for enemies or secrets, similarly to Pause Scumming. Sometimes Developer's Foresight can occur and inaccessible areas will feature an Easter Egg, or the camera will hit an Invisible Wall if it goes somewhere you're not supposed to look. In the same manner, Video Game Perversity Potential may be restricted or not.

If Photo Mode can be enabled at any time and it allows you to pose, this opens the potential for some Gameplay and Story Segregation and even Narm, such as if you make the character take goofy selfies in the middle of a dramatic scene.

Compare to First-Person Snapshooter, which only lets you take photos in first-person and serves a gameplay purpose.