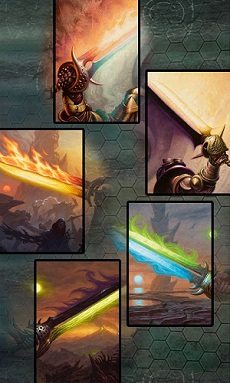 There are ways and ways of making a sword interesting, and adapt it to the user's personality. You can make it large to emphasize strength, you can make it Japanese to imply mastery and mystery, make it curved to point out that the character is evil, and so on.

If you're not satisfied yet and want to further underline your choice, you can always give the blade a weird color.

In Real Life steel tends to be, well, steel-colored. However in fiction there's nothing that stops you from showing colored swords or similar things. Usually, A Wizard Did It. Villains tend to have black or red colored weapon, while the good guys opt for white and other good colors as seen in Good Colors, Evil Colors. A golden weapon that actually works as a steel weapon may count, as in real life gold isn't suited for making weapon blades and such.

If the weapon has elemental powers, then the blade will have the color usually associated with said element. For example a sword with fire powers will be red or orange, while one with ice powers will be blue or white. Poisoned Weapons tend to be green or purple, depending on the setting.

Note: this trope is only for metallic blades, as Energy Weapons are naturally justified for having bright colors. Black weapons are already covered by Black Swords Are Better, so please do not add examples of black blades here.

See also Color-Coded for Your Convenience.

Not to be confused with Tekkaman Blade.