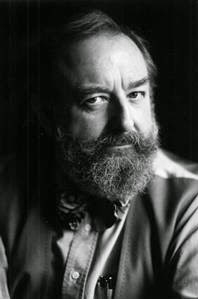 "I think of myself as a bad writer with big ideas, but I’d rather be that than a big writer with bad ideas."
"They called for me and I went to them. I could not do otherwise. The will of the whole of humanity was a strong thing. It smashed through the ties of time and the chains of space and dragged me to itself. Why was I chosen? I still do not know, though they believed they had told me. Now it is done and I am here. I shall always be here. And if, as wise men tell me, time is cyclic, then I shall one day return to part of the cycle I knew as the twentieth century, for (it was no wish of mine) I am immortal."
— Prologue to The Eternal Champion
Advertisement:

Michael Moorcock (born December 18, 1939, London) is a British Speculative Fiction author of roughly 80 novels and short stories collections. He combines a graphic and powerful imagination with an often frustrating inability to resolve a plot except by Deus ex Machina.

In the 1960s he became editor of New Worlds magazine, evolving its format from a fairly conservative science fiction magazine into an anarchic counter-cultural outlet, bringing a much-needed waft of swinging-London "hipness" and progressive sensibility to fantastic and fantasy fiction and touching off the New Wave Science Fiction movement.

Most of his work revolves around the concept of the "Eternal Champion"; a being who undergoes repeated incarnations throughout time, and is destined to maintain the balance between Law and Chaos— whether he wants to or not. Many of his earlier works were written as stand-alone works; but have been retroactively added to the Eternal Champion mythology, mainly through later crossovers.

The Eternal Champion commonly has a sidekick of some sort, if only briefly. Just as the Champion has many incarnations, so does the sidekick, and is commonly referred to as the Eternal Companion. The nature of the Companion varies, from Hypercompetent Sidekick, to The Watson, to Distressed Damsel, to almost pure comic relief. The various sidekicks are also commonly more down-to-earth than the Champion; and frequently Genre Savvy, being aware of the nature of The Multiverse, the Champion, and themselves.

The Eternal Champion also has a (typically doomed) love-interest: the Eternal Consort. Their love affair is often doomed because of the interference of the Eternal Enemy, who has manifested in many forms: quite often with dark desires for the Consort. the Enemy has been Yyrkoon, evil cousin of Elric; Frank Cornelius, the evil brother/cousin of Jerry Cornelius; Johannes Klosterheim, who usually appears in more "modern" stories and generally represents a corrupt and depraved figure of apparent order, and sometimes appears as The Dragon or The Starscream to Gaynor; and reaches his epitome as Gaynor, Prince of the Damned. (There is a suggestion that Gaynor is a manifestation of the Eternal Champion who went "wrong" in some way, becoming the Champion's evil counterpart. When Corum tears the helmet from Gaynor's face, it mutates through untold changes and faces - including, briefly, Corum's - before he dies, leaving his Chaos-armour empty).

He strongly dislikes J. R. R. Tolkien's works despite having met him personally and finding him sympathetic on a personal level (although he has also stated that certain accounts have overstated his dislike of Tolkien's works; notably, he did use The Lord of the Rings as a favourable reference point for the inventiveness of Ursula K. Le Guin's The Left Hand of Darkness. However, there is also the essay "Epic Pooh

", which spells out what he does dislike about Tolkien's works). He also loathes Robert Heinlein and his ilk

. These people's opinions on him are unreported. On the other hand he greatly admires Mervyn Peake and considered the Gormenghast trilogy an injustly-overlooked masterpiece.

He has also written songs for Blue Öyster Cult and Hawkwind and occasionally performed with the latter band. During his brush with Hawkwind he seems to have befriended Lemmy Kilmister, who later went on to found hard rock/heavy metal seminal ensemble Motörhead. He has dedicated a recently-released Hawkmoon omnibus to "his friend Lemmy".

Some members of Hawkwind helped him record a music album under the name of "Michael Moorcock and the Deep Fix" (in the mid-70s). When, with the advent of Internet, enough fans began pestering him for a reissue he made his own personal copy downloadable from his website (the masters apparently having been forever lost). A CD (Dojo Limited DOJOCD88) was released in 1995, audio source unknown (although the sound quality isn't bad).

He has also written comics plots which have been illustrated by Walt Simonson and contributed a few issues to Alan Moore's Tom Strong.

He is one of a number of writers that Games Workshop and TSR ripped off shamelessly. But Games Workshop had the courage to at least credit him in a backhanded way (and thanks to Michael Moorcock, whose fault all this is).

A longtime fan of Doctor Who, Moorcock was commissioned by the BBC to write a Who novel, The Coming of the Terraphiles, or Pirates of the Second Aether!! (2010).

A highly prolific writer, most of his works fit into collections revolving around a particular incarnation of the Eternal Champion; although there are a few stand-alone works. Many of his earlier works were later incorporated into the Eternal Champion mythology.

Some examples of the Eternal Champion works below:

Notable works not part of the Eternal Champion mythology: