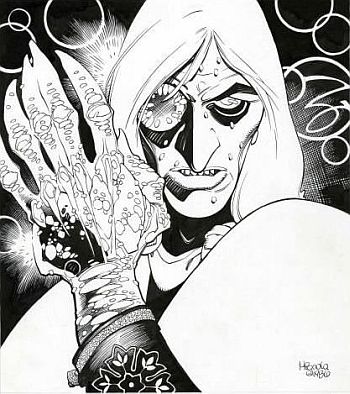 Corum as depicted by Mike Mignola.
"By creating Man, the universe had betrayed the Old Races..."
Advertisement:

A series of novels by Michael Moorcock. It's set in the same multiverse as The Elric Saga, and it's very much influenced by Canon Welding. The main character, Corum Jhaelen Irsei, is the same kind of Tragic Hero as Elric, and is a different incarnation of the Eternal Champion.

The Corum series is composed of two distinct trilogies. The first trilogy involves the war of Order Versus Chaos, with the Lords of Chaos warring with the Lords of Law for control of the world. Having seen his entire race destroyed at the whim of the Knight of the Swords and the hands of the newly arrived race of Man (or Mabden, as the series refers to them) — with he left alive but maimed as the Last of His Kind — Corum and later his allies, find themselves caught in the middle of a war between Gods and primal forces, with only their wits — and some strange gifts Corum recieved from a sorcerer — to aid them. Major themes of the series include — in addition to the obvious Order Versus Chaos — civilisation vs barbarism, the whims of the gods, and whether one person can in fact, challenge a blind and deaf universe.

In the second trilogy, the enemies are a rather different kind of Eldritch Abomination, a group of beings called the Fhoi Myore who make the world cold and thus uninhabitable to humans. The second trilogy is somewhat different in tone, because it (unlike the first trilogy) draws heavily from Celtic mythology.

Alternative Title(s): The Chronicles Of Corum