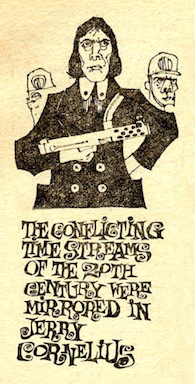 "There's more than life to drugs and sex. It's better than nothing."
— Jerry Cornelius, The Condition of Muzak
Advertisement:

Quite possibly the strangest incarnation of Michael Moorcock's "Eternal Champion", Jerry Cornelius is a hipper-than-hip secret agent/assassin who acts as a needed force of chaos in the world. He travels through time, dies (and gets better), and pines for his beloved sister. He's a Karmic Trickster. Or maybe a Sad Clown. Or a Time Lord. Or maybe he's just a seedy kid from Ladbroke Grove

who has aspirations of being a jukebox hero.

He's probably all of them and a few other things besides.

One of the "New Waviest" of Moorcock's many New Wave works, the work has confounded those who like to assign genres to works since it was written.

As with The Elric Saga, there are many Jerry Cornelius books and stories, not written in the same order as the internal chronology.

These can be found in a single-volume compilation, The Cornelius Chronicles (later The Cornelius Quartet), first published in 1977.

Note: The above short stories were compiled into a novella (Word of God: "The stories are presented in order of writing, and should be read as a continuous narrative"), The Lives and Times of Jerry Cornelius, in 1976.

Moorcock also made the character available to other writers, making Jerry a sort of open-source character nearly 40 years before Jenny Everywhere. Most of the non-Moorcock Cornelius works are harder to find; notable examples include Norman Spinrad's "The Last Hurrah of the Golden Horde" and Moebius's Le garage hermétique de Jerry Cornelius (The Airtight Garage of Jerry Cornelius). Other pieces (including some of the comic strips) have been compiled into the volume The Nature of the Catastrophe (1971, and not to be confused with the short story above).

Just to keep readers' lives interesting, different editions of short story compilations like The Lives and Times of Jerry Cornelius and The Nature of the Catastrophe have different contents. You can see those (and more non-Moorcock Cornelius story compilations) at the Wikiverse (a Michael Moorcook wiki) here.

Perhaps unsurprisingly, Alan Moore had Jerry make a guest appearance in The League of Extraordinary Gentlemen: 1969