Literature / The History of the Runestaff 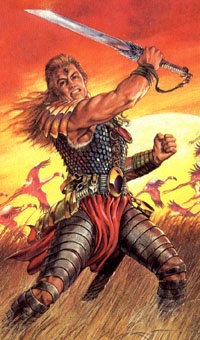 For the Runestaff!
"Then the Earth grew old, its landscapes mellowing and showing signs of age, its ways becoming whimsical and strange in the manner of a man in his last years..."
— The Jewel in the Skull
Advertisement:

Chronicling the adventures of Dorian Hawkmoon, Duke of Köln and another one of Michael Moorcock's Eternal Champion incarnations. Dorian lives in a far-future Earth that has rebuilt itself after the Tragic Millennium, but is being taken over by the brutal Dark Empire of Granbretan. Hawkmoon, whose own land was recently conquered, has to struggle with what has happened to him as a prisoner of that regime, and strives to help one of the few holdout nations, the Karmarg, ruled by Count Brass. This sets off a quest both to remove the infernal device implanted in him by the Empire and to find the legendary Runestaff, which can help restore the balance of power.

Dorian's story is told in a tetralogy and a trilogy: