Humans by Any Other Name 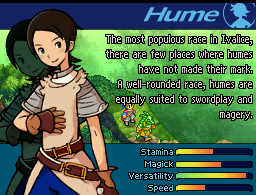 Maria: I've been wondering for a while... What does "Minos" mean?
Jin: [...] Well, it comes from the word "minority." These days, most people are Adepts, so they are the majority. That makes us the minority, and so we're called "Minos." To be honest, I don't like using that word to refer to myself. It feels like admitting defeat.
— Luminous Avenger iX
Advertisement:

In Speculative Fiction, the word "human" can seem out of place in a universe where every other species is named after their homeworld (unless, of course, they come from Humus

). As a consequence of this, or perhaps just to sound "exotic", alien cultures often come up with their own monikers for Puny Earthlings. Indeed, the word "Earthling" itself is an example, and it also shows that most of the time, oddly enough, they name humans after our own terms for our planet and its surroundings, rather than whatever Earth or the Sun is named in their language.

Of course, the word "human" itself originally meant "of earth", arguably making this Older Than Feudalism. The implied contrast, however, was not inhabitants of the Earth as opposed to those of other planets, but mortals walking the earth as opposed to the celestial gods.

Animal characters will also often refer to humans by something besides "human", even in works where other animals have their standard names. For quadrupeds, it's particularly common for describe humans by their bipedalism, such as using "two-legged".

Sometimes indicative of Fantastic Racism, though not as much as Call a Human a "Meatbag" or Son of an Ape. Not to be confused with Human Aliens, or Our Humans Are Different. Compare Ambiguously Human, where a specific individual looks reasonably human, but has something off about them that makes people think otherwise.

A subtrope of this is Planet Terra. Another is Call a Rabbit a "Smeerp".