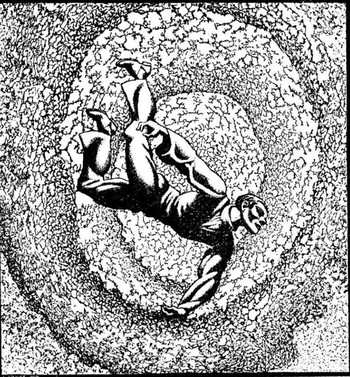 The martians couldn't taste and their hearing was bad, but they had a secret sense all of their own.
Advertisement:

First published in Cosmic Stories (March 1941 issue), by Isaac Asimov. The magazine issue has been uploaded as a digital copy on Fiction House Press, making it accessible as an ebook, too. This story is about a human who gains and loses the martian's ability to sense magnetic amplitude.

Lincoln Fields, a human from New York, is trying to demonstrate music to his friend, Garth Jan, an alien from Mars. Fields is trying to find art and beauty that his alien friend can enjoy. However, Garth simply doesn't have the same senses that humans do. As Fields pressures Garth, they blurt out that a human could be given the ability to directly sense electromagnetic fields, but only for five minutes.

Much later, Fields demands that Garth repay his hospitality by granting him the Martian sense. His friend complies, and arranges for a Martian concert, a portwem, to be played while he is able to hear/see it.

"The Secret Sense" provides examples of: