Literature / Secrets Not Meant to be Kept 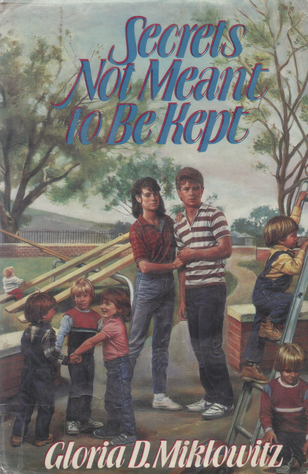 Secrets Not Meant to be Kept is a 1987 young adult novel by Gloria D. Miklowitz. In this novel, seventeen-year-old Adrienne "Adri" Meyer is experiencing angst over problems being close to her boyfriend, Ryan O'Connor, as well as disturbing flashbacks, many of which involve a rabbit. Meanwhile, her sister, Becky, aged three, is undergoing a marked personality change: acting out destructively, having severe nightmares, and expressing gruesome ideas. Everything comes to a head when, with Ryan's help, Adri realizes that she was molested at Treehouse — the same preschool/daycare center her sister is currently attending.
Advertisement:

Written at the height of the day-care sex-abuse hysteria

, which, for the most part, has since been discredited, this book addresses difficult subject matter, including a pattern of institutionalized child sexual abuse dating back nearly twenty years, with the aim of educating readers about the warning signs of such abuse and the importance of getting help.

This book can be borrowed from the Internet Archive with a free account.