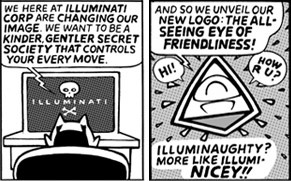 The Ministry of Love was the really frightening one. There were no windows in it at all. Winston had never been inside the Ministry of Love, nor within half a kilometer of it. It was a place impossible to enter except on official business, and then only by penetrating through a maze of barbed-wire entanglements, steel doors, and hidden machine-gun nests. Even the streets leading up to its outer barriers were roamed by gorilla-faced guards in black uniforms, armed with jointed truncheons.
— 1984
Advertisement:

Something, often a company, that is described with an adjective in the title that is entirely at odds with what it actually does. Commonly, something evil will be paired with a nice-sounding adjective. This also applies when the title's implications are opposed to what the company/organization/Evil Overlord does. Basically, when you apply a completely inappropriate adjective to something (often to make it seem better), that's this trope. Look for characters exclaiming "Hey...this isn't happy!" or something similar.

Oppressive dictatorships in fiction (especially tiny ones) will have long names incorporating the words "Free," "Democratic," "Republic," "of the People," or any combination thereof.

This is a Newspeak trope. There is usually a rather pointed takeaway for the audience about the people doing the naming: a society that uses vicious irony like this is never, ever nice or just misunderstood.

For objects of doom that masquerade as harmless objects, see Happy Fun Ball or the more prosaic Artifact of Doom.