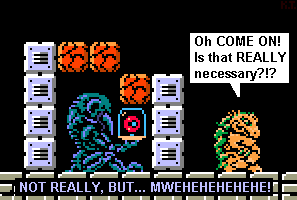 That's what he gets for stealing Samus's high-jump!
Planet Zebeth... a plot-based Metroid comic strip, centered around booze, chaos, and destruction. And people say that Paint and text editors are useless...
"Metroids are jerks."
— Kraid
Advertisement:

is a Sprite Comic that revolves around the adventures of Samus, Kraid, Ridley, and other characters from the original Metroid for the NES. The story takes place In Medias Res of the first game... kind of. Kabutroid, a cross between a Metroid and and a Kabutops from Pokémon, has uploaded the main characters (and a slew of "enemy" characters) to Planet Zebeth, a planet like Zebes in appearance but not in layout. Samus and her previous antagonists, Kraid and Ridley, now spend most of their time looking for powerups, booze, and generally goofing off.

Some other recurring characters include "Boxy and Unspawny," a pair of normal enemies where one is trapped in a box and the other is half-spawned on the outside of the box. Their only wish is to die. There is also "Gronky," a sprite glitch that Crocomire Hunter tries to keep as a pet, and the Metroid Queen, Ophelia, who was taken from ZR388, (the Zebeth version of SR388 from Metroid II: Return of Samus), and serves as Ridley's bouncer.

Sadly, the Metroid-related storyline seems to have petered out after the final battle against Mother Brain. Instead, Kabutroid has been making a comic-blog based on events in her own life and random musings, etc. A new Zebeth comic does sometimes pop up every few months still, though.