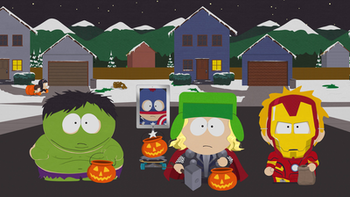 This is a Sub-Trope where characters (usually from Webcomics) will frequently cosplay for Halloween rather than buying or making generic costumes. The characters commonly appear on a single panel, which usually occurs out of continuity and can happen even if the characters come from a setting without a Halloween holiday. The characters can all cosplay to a single medium and/or cosplay as characters that inspired/influenced their own design.