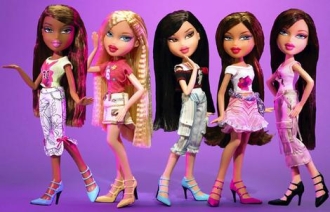 A line of anime-styled fashion dolls created by ex-Mattel employee Carter Bryant and produced by MGA Entertainment. Released in 2001, the line did the unthinkable and dethroned Barbie from her spot as the #1 doll line among girls. The Bratz line features an ethnic rainbow of different characters to choose from.

The dolls' faces and bodies were obviously unnaturally proportioned so that they couldn't promote an unhealthy body image as Barbie is so often accused of, but unfortunately their personalities brought up another controversy as they revolved entirely around make-up and high fashion. They also had much narrower career paths than Barbie, focusing on glamorous occupations like models, pop divas, actresses, make-up artists, hairdressers, and fashion designers (Barbie, by contrast, has been everything from a veterinarian to an astronaut).

The line eventually became popular enough to warrant a bunch of spin-off lines, several animated Direct-To-DVD movies, a short-lived cartoon series, and a live-action movie, acquiring enough spin-offs in enough media for us to make the Franchise.Bratz page.

In December 2008, Mattel won a copyright lawsuit against MGA that ruled that, since Bryant was still working at Mattel when he created the original dolls, they were Mattel's intellectual property. As a result, MGA was banned from selling all 40 dolls in the line

. MGA successfully appealed the ruling in July 2010 and regained ownership

. In August, they released updated dolls with wider figures, less make-up, and more modest clothing to celebrate the franchise's 10th anniversary (and so that they can claim they are not the same designs that Mattel claimed ownership of, but that is neither here nor there.)

In late 2012, the line expanded with Bratzillaz, who are not only the cousins of the main cast, but also witches. The line takes obvious cues from Harry Potter, but has mostly been compared to Mattel's Monster High, and with good reason- MGA seems to be doing their best to openly compete with Mattel's juggernaut, with a similar catchphrase ("Glam Gets Wicked", as opposed to "Freaky Just Got Fabulous") and even a Youtube channel that has short "webisodes" and even a live-action music video which has been compared to the Monster High "Fright Song" video. As of 2015, it seems Bratzillaz is a retail failure, as even the original 5 dolls can be purchased for well below original retail cost, the webisodes only received very sporadic updates and new doll releases have been sparse at best since 2013.