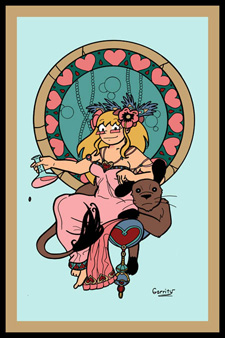 Someday I will find the secret
to your social chemistry.
"Young lady, you fail to grasp the basic principles of mad science. Common sense would be cheating."
— Professor Lupin Madblood
Advertisement:

Answering an innocent job offer, Dave Davenport is drawn into a shocking spiral of vice, crime and moral depravity. Hopelessly ensnared by a madwoman's feminine wiles, can he return to the world of sanity before it is... too late? Narbonic skates over some surprisingly serious territory, but with such a light touch you will probably be too busy laughing to notice. Formerly on a subscription site, the story ended in late 2006, whereupon the entire archive was made free. A backup can be found here

You can view the comic, with toggleable commentary (wherein cartoonist Shaenon K. Garrity explains the previous-comic background of the major characters, and comments on each strip) here

. (And finally please refrain from reading the spoilered text below if you intend reading this comic at some point in the future or are following the Director's Cut in real time.)

Immediately after the end of Narbonic, it was followed by Skin Horse, later revealed to be set in the same universe.

Artie: So what we've seen up to now is the reassuring persona?
Mel: Hells yeah. Not even I wanna meet Real Helen in a dark alley.

And a little later

in the same storyline ("Professor Madblood and the Doppelganger Gambit"):

NOTE: Sound does not travel in a vacuum. All sound effects are produced by the cartoonist while drawing.

Miss Narbon: You're a cowardly wad of sputum, Professor.
Madblood: Thank you, madam.