Once for Yes, Twice for No 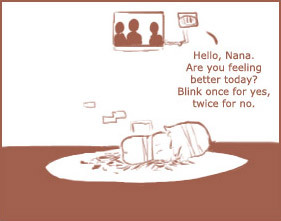 "Blink your eyes
Once for yes
Two for no..."
— Radiohead, "Bodysnatchers"
Advertisement:

A character is only able to communicate through a limited set of responses, but tries to convey a lot more information than their medium provides. The title refers to the most extreme version, where the character has only one possible response they can give.

In one standard version of this, the "character" is a spirit at a (generally faked) Spooky Séance, and all they can do is rap (usually because it's easy for whoever's faking the seance to make a rapping sound discreetly under the table). They then end up rapping once for yes, twice for no, and then spelling out a message by having the participants in the seance run through the alphabet, to be stopped by a rap when they reach the next letter in the message.

A common joke is for two raps to be misinterpreted as "yes, yes". Another (often in the seance variant) is for a character to say "Is there anyone there? Knock once for yes, twice for no!"

Three Gems and a Baby

Three Gems and a Baby