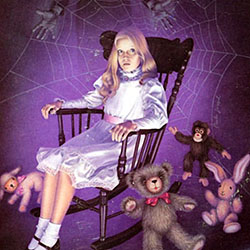 "So Audrina goes round and round the mulberry bush, wondering exactly how Arden could have known the First and Best Audrina, and space aliens from 20,000 light years away shout, and tiny one-celled organisms deep within prehistoric lakes shout, and you shout, and I shout, and Bastian from The Neverending Story shouts, "THERE IS ONLY ONE FUCKING AUDRINA, YOU BRAINLESS MORON, AND THAT AUDRINA IS YOU!"
— Erin Callahan, Forever Young Adult's review

My Sweet Audrina is a 1982 novel written by V. C. Andrews. The only standalone novel written in her lifetime, it is—depending on who you speak to—either her best book or her worst, with a twist that either knocks readers off their feet or gets guessed in the first twenty pages. Whichever camp you fall into, it is arguably her most sensational and shocking work, dealing extensively and often graphically with rape, mental illness, and disability among many, many other sensitive subjects.

Seven-year-old Audrina Adele Adare lives in isolation in a Old, Dark House called Whitefern, along with her Overprotective Dad Damian, beautiful but self-absorbed mother Lucky, her bitter spinster aunt Ellsbeth, and Ellsbeth's jealous, spiteful daughter Vera. Audrina suffers from a sporadic memory and a strange inability to sense time passing, leaving her confused and vulnerable. Her papa forbids her to go to school, make friends, or visit the woods behind their house where, on a rainy day nine years before Audrina's birth, her adored elder sister (also named Audrina) was raped and murdered.

Trapped in the walls of Whitefern, helpless in the hands of her family, and oh so young and trusting, Audrina is forced to sit in the First and Best Audrina's rocking chair until she absorbs her dead sister's special gifts so that Papa will love her as much as he loved the First Audrina.

It goes about as well as you'd expect.

As Audrina grows up, she begins to break away from her papa and her home, but her life is still overshadowed by memories that don't belong to her, memories that threaten to ruin her marriage and destroy her sanity. If she's ever going to live a normal life, she must finally learn the terrifying secret that everyone elsenote including the reader already knows.

My Sweet Audrina was adapted as a Made-for-TV Movie for the Lifetime Network in 2016. A ghostwritten sequel, Whitefern, which continued the story of Audrina as an adult, was published in 2016.