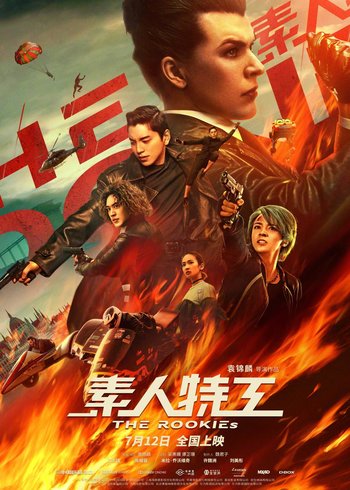 Hold on a second, Milla Jovovich in a Chinese movie?
Advertisement:

Zhou Feng (Wang), an extreme sports lover, while attempting to film a viral stunt to be uploaded on Youtube, ends up accidentally crashing into a covert meeting of The Order of the Phantom Knighthood, a global peacekeeping organization who operates in secret. When elite agent Bruce (Milla) of the Knighthood considers Feng to have potential as an operative, Feng ends up becoming part of a team consisting of policewoman Miao, scientist Ding Shan and doctor LV. Before they knew it, these unlikely bunch of misfits will have to save the world from a madman and terrorist leader called Iron Fist (Not that one) who intends to release a deadly virus across the world.

Not to be confused with the TV series from the 70s.