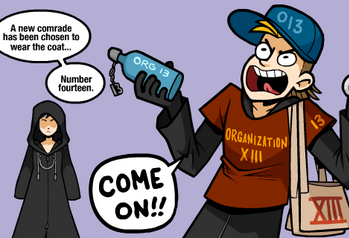 Just like a person has a name (sometimes more), most groups also have a name. This name may come from different sources, such as the founder's own name, an acronym of the members' names, a random thing you just happen to see, or a random cool-sounding foreign word. One popular method is to name the team after the number of members.

We can expect that the Furious Five will have five members, and the Three Templars to have three members. After all, it's outright said in the name, right? Not always. These groups often have one extra member in them.

The reason why this one member is excluded from the team naming varies. It might be because they're supposed to be a secret member nobody is supposed to know, or that their task is different than the other members, or they're another member's twin, or it's just for the lulz, or they just signed on late and it is just too much trouble to change the name to reflect the current configuration.

A Sub-Trope to Non-Indicative Name. If applied to elements, see Element No. 5.