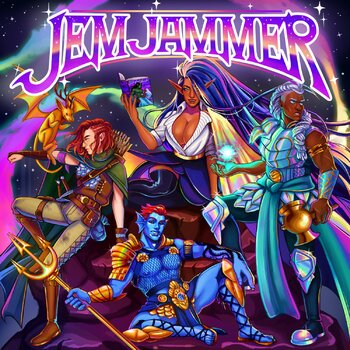 , with charcters designed by Rio

Jemjammer is an Actual Play podcast set in the Spelljammer setting of Dungeons & Dragons. The game is DMed by Kit Walker, and the players are Mackenzie "Maq" Weaver, Annie Craton, Kit's mom Vicki, Rio, and Alexi Peppers. The podcast launched in 2018 after three of the ladies put their Jem and the Holograms fancast The Jem Jam on hiatus due completing the animated series and comics.

Our story begins after a strange and fantastic series of falling stars land in the wilderness surrounding the coastal city of Stormhaven. Three part-time adventurers—the boisterous elven bard Cacophony (Maq), the no-nonsense aasimar cleric Jylliana (Annie), and the stoic human ranger Ælfgifu (Vicki initially, with Alexi taking over later)—come across a disheveled woman trying to reach one of the landing sites. As they help her they discover the stars are actually ships that sail beyond the limits of their planet, and soon they are embroiled in a cosmic adventure. Later on they're joined by feisty pirate triton Artie (Rio), and together the party encounters all manner of ancient monsters, political intrigue, and sexy book clubs.

The show is part of the Crooked Russian Cam network, and updates for it can be found on their twitter

, or their official site

This podcast contains the following tropes.

Aelfgifu: What are we supposed to learn? What's the point of the parable?Artie: Feed your asshole? I don't know. Where were we going with this?Aelfgifu: You started it! Where are you going with it? We can't answer that for you!
Artie: I'm going to my room!