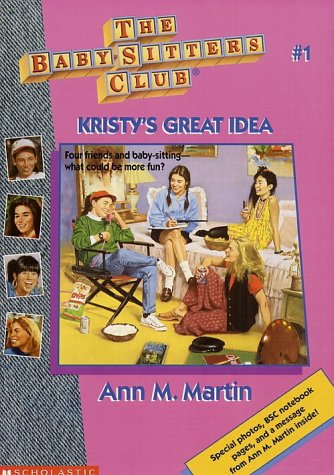 A highly successful and popular series of middle grade books aimed at pre-teen girls, about a group of kids who run a club that offers their services as babysitters. The series was written by Ann M. Martin and published between 1986 and 2000. It also inspired a 1995 film, two different TV series, dolls, 2 board games, 4 educational CD-ROM games, a soundtrack, several graphic novels illustrated by Raina Telgemeier, Gale Galligan, Gabriella Epstein and Chan Chau, and more. Every story was told from the first-person perspective of the protagonist, and began with a description of the rest of the club members.

In most of the books, the titular club consisted of:

There were at least three spinoff series: Baby-Sitter's Little Sister (about Kristy's seven-year-old stepsister, Karen); California Diaries (about Dawn and her friends in California); and Friends Forever (in which the club was reduced to its original four members). As well as these and the main series, there were additional Mysteries, autobiographical, and Super Specials books. Little Sister also had its own spinoff, The Kids In Ms. Colman's Class. As you might suspect, many of the 300+ books were ghostwritten, although Martin wrote the original 22 books herself (and stopped writing altogether around book 58).