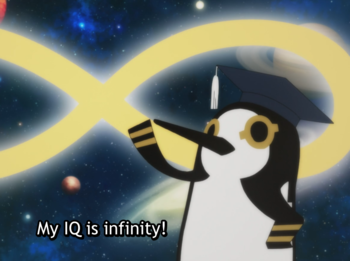 "Mortimer has been a thorn in your side for as long as you can remember. Your IQ test score was 314 — Mortimer's was 315. He always held that over you, never letting you forget for one day."
— Commander Keen, Keen Must Die
Advertisement:

A character who is a genius, ideally, tends to stand out. But that's not enough for most authors, who really want to drive the point home that this character's intellect is so far beyond that of a mortal man, that there is no way anyone can match their intelligence. Luckily, there's a fairly basic solution - give them a high IQ score.

Of course, Bigger Is Better, so the natural tendency is for these assigned high scores to reach truly absurd levels. After all, a character with an IQ of 200+ clearly is the smartest kid on the metaphorical block, right? Right?

This one is a staple of the TV Genius. If handled poorly, it may turn into a case of an Informed Ability.

To illustrate exactly how improbable a given IQ score might be, see IQ Testing. For numerical stats, see the analysis page.

Compare Elite School Means Elite Brain, another easy way to indicate a character is a genius.