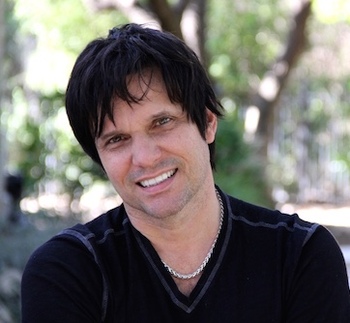 "There’s a reason we are drawn to the light. A reason why we fear darkness. It’s important to be terrified and unnerved about certain things."
Advertisement:

Ted Dekker is a New York Times best-selling author of more than twenty novels. He is best known for stories which could be broadly described as "suspense thrillers with major twists and unforgettable characters," though he has also made a name for himself among fantasy fans.

Dekker was born in the jungles of Indonesia, amongst cannibals who killed the parents of several of his friends when he was a child. Undeterred his parents befriended the people and made their home with them. It was a dark place full of witchcraft and death. Violence and bloodshed were common—perhaps this explains some of the violence in Ted's novels.

Separated from his parents at age 6 to attend a coastal school for a few months at a time, Dekker describes his early life in a culture to which he was ultimately a stranger as both fascinating and at times lonely. It is this unique upbringing that forced him to rely on his own imagination to create a world in which he belonged.

Now, nine years from the publication of his first novel, his novels have sold roughly 5 million copies worldwide. Two of his novels, Thr3e and House, have been made into movies with more in production. Dekker resides in Austin with his wife Lee Ann and their children.

Works by Ted Dekker with their own pages include:

Other works by Ted Dekker contain examples of: