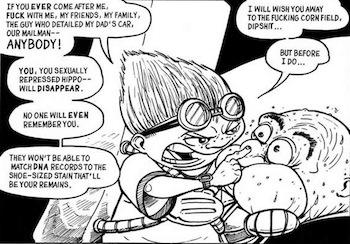 Barry gets PISSED.
You people are fucking with the wrong ten-year-old.
— Barry, after TIMM attempts to abduct him and grabs Jeremy instead.
Advertisement:

The Adventures of Barry Ween, Boy Genius is a comic book by Judd Winick, published by Image Comics and Oni Press over the course of three series between 1999 and 2002 (which, incidentally, makes it older than another famous boy genius).

It follows the life of Barry Ween — the world's smartest human, a ten-year-old Gadgeteer Genius who hides his intellect from the rest of the world — and his friend Jeremy Ramirez, a hyperactive and sex-obsessed, but overall rather normal, boy of the same age who's the only one to know Barry's secret.

The series is known for its profanity-rich dialogues and has been described as "Dexter's Laboratory meets South Park"; and it delights in subverting and lampshading many common comic tropes.

The Adventures of Barry Ween, Boy Genius provides examples of the following tropes: