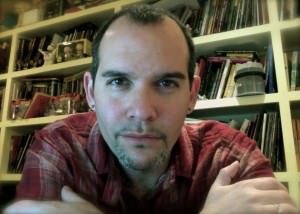 Perhaps best known for his role on MTV's The Real World, Judd Winick (born February 12, 1970) is an American cartoonist and comic-book writer. He began his career with the humor strip Nuts and Bolts while attending the University of Michigan, but Winick first found critical success with Pedro And Me - an autobiographical comic that told the story of how he and his Real World co-star (the late HIV-positive gay-rights activist Pedro Zamora) became best friends.

Winnick's first success in the mainstream comics field was The Adventures of Barry Ween, Boy Genius, and he is currently under an exclusive contract with DC Comics. His other works include The Life and Times of Juniper Lee; Marvel's Exiles; and DC's Batman, Green Arrow, Green Lantern, The Outsiders, and Batwing in DC's "New 52."

As of 2015, Winick's newest project is Hilo: The Boy Who Fell to Earth, the first in a series of children's books. (Parents, please note that if your kid loves Hilo, Barry Ween is not more of the same.)