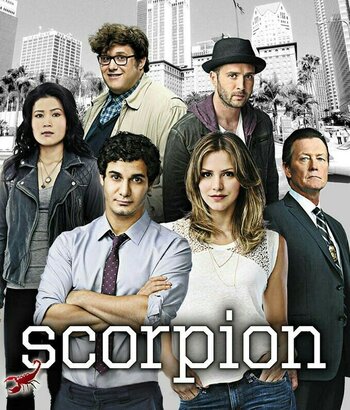 Clockwise: Sylvester, Toby, Cabe, Paige, Walter, and Happy.
From CBS, the network that brought you The Big Bang Theory, comes another series starring a group of brilliant but maladjusted nerds—but this time, they're action/adventure heroes (more or less). It's Based on a Great Big Lie, specifically the claims of executive producer Walter O'Brien

, who supposedly has an IQ of 197 and runs a security firm named Scorpion Computer Services.
Advertisement:

The fictional Walter O'Brien (Elyes Gabel) ekes out a living fixing small businesses' computer problems in Los Angeles. He lives in a converted garage with three other troubled geniuses: Sylvester Dodd (Ari Stidham), a "human calculator" who relates to numbers more than people despite his extremely high EQ; Dr. Tobias M. "Toby" Curtis (Eddie Kaye Thomas), a "world-class behavioral scientist" whose keen understanding of human behavior has endowed him with a huge gambling addiction; and Happy Quinn (Jadyn Wong), a "mechanical prodigy" who has serious problems with authority and the physical know-how to back it up. These people are all experts in their fields, but when it comes to the minutiae of everyday life, from social skills to paying bills, they're barely functional. However, Walter is able to fully complete Team Scorpion when he manages to meet and, over the course of a very stressful day, befriend waitress Paige Dineen (Katharine McPhee), partially because he recognizes that her "challenged" nine-year-old Ralph (Riley B Smith) is actually a Child Prodigy like he once was.

And why is the day so stressful? Because Walter receives a visit from Cabe Gallo (Robert Patrick), a Homeland Security agent who mentored Walter when he was a Teen Genius, and with whom he has a contentious relationship. It seems that due to a faulty software update, the communication system at LAX has shut down, and several passenger planes are endangered; disaster will strike unless someone as brilliant as Walter can fix everything. Walter and his friends — including Paige, who gets roped into helping after they end up back in her diner — go on an epic adventure to save the planes, which they do just in time. Afterwards, Cabe convinces all of them to become a team who will help the government deal with high-tech threats before they can hurt innocent people. Soon, Walter and company are saving the world on a regular basis — and still dealing with their various issues.

CBS ended the show after it ran four seasons.