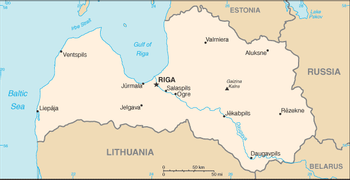 "What if upvote is potato, and downvote is potato. When downvote, potato is actually rock. But when upvote? Is also rock."
-r/LatvianJokes
Advertisement:

Latvia (Latvian: Latvija), officially known as the Republic of Latvia (Latvian: Latvijas Republika), is a Northern European country and the middle one of the three "Baltic Republics" along with Estonia and Lithuania, and has shared their modern history of brief independence following World War I before being snapped up by the Soviet Union until independence in 1991. This is why the Soviet Union and Allies in general aren't very popular in Latvia - as the people often see Hitler as the liberator, due to how he stopped the Soviet atrocities in Latvia (no, they're not supportive of his other policies). In fact, it wasn't until 1918 that the three of them had clearly delineated borders - for most of their history the area known as Livonia or Courland/Kurland was a vaguely-defined parcel of land passed around between Prussia and the Teutonic Knights, Sweden, and Russia.

A lot of people were drafted/volunteered into the Waffen SS Latvian Legion during the World War II Nazi German occupation and used to fight the Soviets. Not supporting Hitler directly, they saw this as the only opportunity to secure some sort of an independence from the Soviets, which, by then, had sent huge amounts of Latvians to gulags or just shot them. We have a remembrance day for them in the 16th of March, a date which is, unfortunately, portrayed in media as some sort of a Nazi-support celebration, but this is not the case.

On the other hand, a lot of Latvians, ever since World War I, served in the Red Latvian Riflemen. They were crucial in the Revolution in Russia, providing a cadre of battle-hardened disciplined shock-troops, and later, protecting Lenin himself. Many Latvians took high positions in the law enforcement, military, and intelligence services of the newly founded Soviet state. During World War II, many Latvians joined the Red Army and fought against the Nazis, notably during the Battle of Moscow.

Also, a cool thing, done together with our neighbours, the Estonians and Lithuanians, was getting independence via making a huge chain of people, stretching from Vilnius to Tallin

Since independence, Latvia has become a popular tourist destination, joined the European Union, and adopted the Euro as its national currency in January 2014. Also, Latvia has one of the fastest internet connection speeds in the world, as seen here

, due to extensive government backing.

In sports, apparently, the Latvians are really, really good in BMX and Beach Volleyball, getting a lot of success in these areas lately. The national sport is Ice Hockey, the fanaticism of this is around the same level as in Canada. If Latvia's only good hockey team - Dinamo Riga - performs well in KHL, it's a national celebration. And every Latvian who ends up in NHL is a national hero - in fact, thanks to a surge in online fan voting from Latvia, Zemgus Girgensons was the leading vote-getter for the 2015 NHL All-Star Game. The Latvians were also the very first European Champions in basketball.

Culturally, due to everything that has happened with the small country, the Latvians are in the exact middle between the Russians and Germans, with the tropes associated to these countries appearing here almost equally, and sometimes in hilarious ways (for example, the Latvians are never late for work. Even when they are completely drunk).

The Latvians (the older term 'Lett' has fallen out of use in English) are really touchy about being mistaken for the Russians - and by "touchy", we mean that calling a Latvian a Russian is a sure-fire way of getting into a fight. This might have something to do with the fact that out of the three Baltic states, Latvia was Russified the most; the number of Russians doubled from about 250,000 to 500,000 in just two decades after the Soviet annexation in 1940 and peaking at 900,000 in late 1980s (35% of the total population). For many years, the Russians actually made the majority in the capital and most populous city, Riga, and still is in the second-biggest city Daugavpilis. This created a problem in the years after independence, as the Baltic countries have made a resolute agreement not to offer automatic citizenship to residents who migrated in post-1940 or recognizing languages other than their own at all. Yes, until 2006, more than half of the population of the country's capital were considered illegal immigrantsnote  Admittedly, that's a hyperbole. There are Russians who have become citizens, too, but the percentage of those who do not are still very high.

Also, the Soviet era made us strong. One of the least politically correct countries in the region, the Latvians are huge fans of Black Comedy and Self-Deprecation (usually such jokes, a lot like Russian 'anekdoty' are told in intentionally poor grammar for added comedy value). Here's some examples:

Regarding the national language, it's considered by linguists to be one of the most conservative from the Indo-European language family, though not to the same extent as Lithuanian. For non-speakers, it sounds vaguely Slavic-ish, which is understandable, since the language is a part of the clade that contains the Slavic languages, albeit (like Lithuanian) having split from the others eons ago. And no, no matter what dictionary you find about Latvian, "kavorka" does not mean "the lure of the animal", nor it is a word of Latvian at all (or other languages for that matter).

Latvian regional stereotypes are almost completely limited to those about Kurzeme (Courland, the northwest), the capital region around Riga, and Latgale (the southeast). The Kurzemnieki (Courlanders) are portrayed as rustic and slightly dim peasants with a drawling and near-incomprehensible accent that drops the latter half of every word, subsisting off of farming and forestry and eating potatoes, fish and assorted weeds. People from Riga, on the other hand, are portrayed as fancy city-dwellers with a pretentious accent who all have retail jobs and speak English. The Latgalians, when they aren't confused with the Russians, are portrayed as backwater savages who speak an alien tongue and are more Lithuanian-Belarusian than Latvian. Zemgale and Vidzeme? Where's that?

Latvian cuisine is a simple and no-nonsense thing: potatoes, pork, smoked fish (in Kurzeme), sour cream and a whole lot of dill. Add various pickles and preserves to taste.

Also, a special note for British tourists: our monument of freedom is not a public toilet. Otherwise, come and visit us, a pint of beer is cheaper that a 0.5lither bottle of coca-cola.