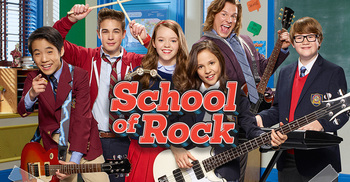 School of Rock is a Nickelodeon Kid Com based on the movie of the same name. Mr Finn, a failed musician, acts as a long-term substitute private middle school teacher but teaches his class about playing rock instead of history as they practice for Battle of the Bands.