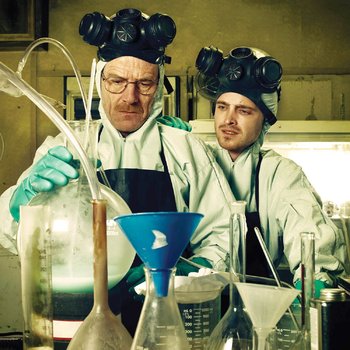 A character whose passion is fiddling about with chemistry sets... has taken a dark turn. In Real Life, the term "clandestine chemistry" refers to any chemical science that's being done in secret for illegal means — usually (in fiction, almost exclusively) manufacturing drugs. Expect the Clandestine Chemist to work out of a dingy little lab — trailers and garages seem favorites — and to broker his wares to the local crime kingpin, with all the drama that typically accompanies a career in organized crime. However, it's not impossible for heroic types to have a need for their services.

These characters are likely to overlap with Mad Scientist, especially if they've been dipping into their own supply. On a sliding scale of criminal unpleasantness, this character is usually placed slightly higher than the Playful Hacker, probably because Drugs Are Bad. (And messing around with chemicals unsupervised is usually a bad idea, for both legal and safety reasons.)