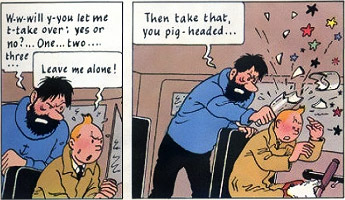 Not even Tintin is immune to having a bottle broken over his head!
"I think it's time I cracked open this bottle!"
— The Family Killer, The Stepfather II
Advertisement:

As one of the standard Improvised Weapons for the Bar Brawl, it makes sense that bottles have a certain special place in the world of weapons. Getting hit with one is actually fairly damaging due to the way they are constructed, and it's fairly easy to inflict serious head injuries on people (if not actually kill someone) with them. The fact that they come with a ready-made grip at the neck doesn't hurt either.

Many of these end up falling under the Soft Glass rule and shatter easily when they likely wouldn't in real life, (beer bottles, in particular, are actually rather hard to break without a lot of force and knowhow due to how thick the glass is; indeed, most beer bottles are tougher than most people's skulls,

) though this aspect of them is occasionally subverted comically. Some people in Real Life expect bottles to break as easily as they do in movies and wind up with either a whole bottle or a handful of glass shards. In short, instead of breaking when swung, a bottle can make for a rather durable club if thick enough.

This trope also often overlaps with the Sinister Shiv trope, because there's a common and more intimidating variation where the wielder will deliberately break the bottle on something hard first, leaving a half-bottle with the base end now made up of a lot of broken glass shards, perfect for shanking and stabbing. Again, Real Life applications of such are highly impractical, since not only are real bottles a lot harder to break, if one does attempt to bust one open for their makeshift shiv and succeed, they'll most likely destroy the entire bottle outright instead of the pointy half-bottle they were going for. Smashing a beer bottle into a bar table is more likely to break the table than the bottle. There's also the risk of the bottle-smasher getting hit with glass shrapnel, making this potentially counterproductive.

In Comedy, they might attempt this with a plastic bottle; needless to say it doesn't break (or shatters like glass).note Hard plastic water bottles filled with liquid can actually hit quite hard, and if the liquid is frozen, they are fully capable of hitting hard enough to cause a severe concussion or even fracture a human skull.

For all you beginning bar brawlers, you're generally better off hitting people with an intact bottle (if empty — we did mention some beer bottles are harder than most people's skulls, right?), or, if they're full and you have a good arm, throwing them.note All kidding aside, please don't do this in real life unless the situation is extreme - most jurisdictions will treat this an assault with intent to cause serious bodily injury at the least.

When you use the person instead of the bottle to attack, it's Grievous Harm with a Body. When you have a bottle full of petrol with a wick, it's a Molotov Cocktail. When a non-improvised weapon is intentionally formed out of glass, it's Glass Weapon. Can be an example of Bizarre Beverage Use if the bottle is full.