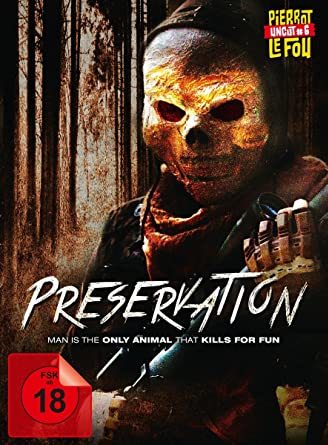 Preservation is a 2014 horror thriller film that was directed by Christopher Denham. It had its world premiere on April 17, 2014 at the Tribeca Film Festival and stars Wrenn Schmidt as a woman trapped in a forest preserve, stalked by maniacs.

Hoping to escape their own troubles, Wit (Wrenn Schmidt), her husband Mike (Aaron Staton), and his brother Sean (Pablo Schreiber) decide to head out into a secluded forest preserve on a hunting trip. Mike is hoping that this will help Sean deal with his PTSD while Wit is hoping that she can rekindle her sagging relationship with Mike, who seems to be more interested in spending time on his cellphone than with her. Once they reach their destination the trio is undeterred by signs proclaiming that the preserve is closed and they continue on with their vacation unabated. The already strained atmosphere is made even worse when they wake up the next morning to discover that someone has stolen all of their belongings and marked each person's forehead with a big black "X". As the trio tries to deal with their existing stresses and the new fear of being hunted, they begin to turn on one another.