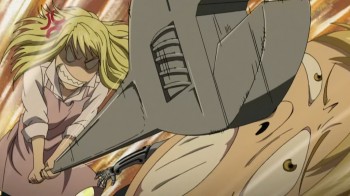 She'll fix you good!
Jade: I had no idea those pliers came equipped with the "club" option.
Pey'j: Model D53, little lady. Slices, dices... and pounds.
— Beyond Good & Evil
Advertisement:

Wrenches are tools often associated with The Engineer, Mr. Fixit and the Wrench Wench, using them to build and repair objects, whether by tightening bolts or Percussive Maintenance. Like other tools used in construction (hammers, nailguns, etc.), wrenches can be very effective weapons, even by the Improbable Weapon User.

Very much Truth in Television as a good monkey wrench (also known as a pipe wrench) can be made of very sturdy materials, and some can weigh quite a bit on top of that. So, in a pinch, you can very easily break someone's skull wide open if you hit'em hard enough.

Unrelated to Spanner in the Works, unless what derails your Evil Scheme is underestimating the combat potential of the Wrench Wench. See Crowbar Combatant for another tool used as an effective weapon.

These wretches called Rocky Wrenches attempt to drench Mario with wrenches to bench him.

These wretches called Rocky Wrenches attempt to drench Mario with wrenches to bench him.