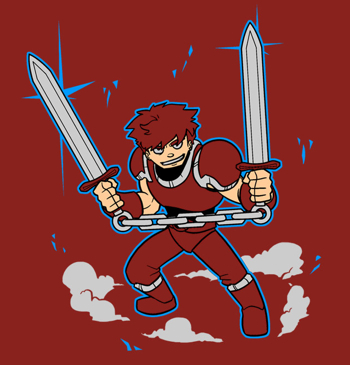 Sword Chucks, yo!
"I need gopher-chucks!"
— The Chosen One, Kung Pow! Enter the Fist
Advertisement:

Nunchucks are fun! The Ninja love them, and they are one of the most famous martial arts weapons around (next to the katana). The best thing about them is the fact that they are so easy to make! All you have to do, is take two random items, and connect them with a rope or a chain, and there you go! Instant Chucks!

Forget practicality, this one runs on pure Rule of Cool. Being such an easy weapon to make, a Combat Pragmatist can make some while locked in battle. Probably the most popular way to make the chucks for a hero is to break the shackles he was bound with, or use the ball and chain he was attached to. If he is fighting multiple enemies, Asskicking ensues, if not, they will be discarded very quickly.

Sub-Trope of Mix-and-Match Weapon, and Fighting with Chucks. Compare with X on a Stick.