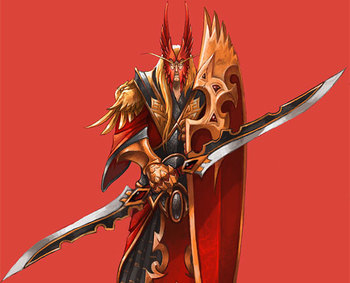 Twice the blade for double the blood.
Advertisement:

Dual Wielding characters use a weapon in each hand, which is cool. Do you know what's even cooler? Using a single weapon with two ends. It could be a stick with sword-blades on both ends, or maybe a double-bladednote Not to be confused with "double-edged", which is one blade with both edges being sharp — and may or may not overlap with "double-bladed" (two separate blades on the same weapon). sword with both blades coming out of the same end of the hilt (in the former case, the weapon is usually wielded like a bladed Simple Staff.) If a Double Weapon is light enough (or the wielder is strong enough), then it can be dual wielded for a total of four blades. Fighting using a Double Weapon often involves a lot of spinning attacks.

In terms of Real Life effectiveness, these weapons could actually be quite effective in combat due to their inherent speed and versatility

provided someone had the skill to use one. CARRYING a double bladed sword on the other hand would be a far more difficult affair (How do you sheathe it?), but few are the writers who let such details bother them.

Not to be confused with Dual Wielding. See also Blade on a Stick and Sword Tropes for the single-bladed variants of this weapon. If the Double Weapon can be split into two single-bladed weapons, it is also a Bifurcated Weapon. Tends to be impossibly cool. See the Sub-Trope, Fighting with Chucks, when what connects the weapons is a chain or something similar.