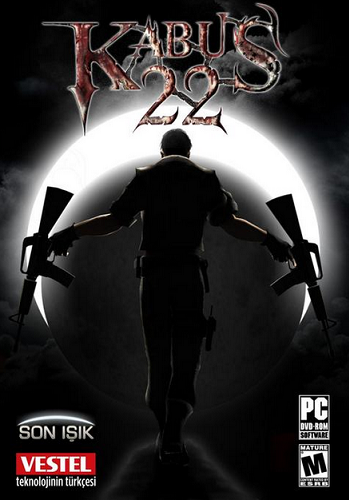 Kabus 22 is a Turkish Survival Horror game, developed over the course of three years by a team of five people named Son Isik Ltd. It was released for PC on December 25th, 2006.

The story begins with certain people suddenly becoming markedly more prosperous and successful from the year of 1995 onwards, in a way that defied conventional explanations and attracted the envy of their peers, as they saw what was apparently true happiness. By February of 2000, there were enough of these people to openly declare that it was their new faith that brought such success upon them, and that others would only need to convert to it in order to become equally successful and long-lived. The temptation did not just reach the normal folk; the majority of the world's most powerful people ended up converting over the next two years.

In 2002, the order had enough power to declare war upon the remaining unbelievers. Most countries have agreed to convert to their faith rather than to challenge its collective might, and the holdouts were eventually crushed as well., with the world getting divided into 22 zones to enable easier governance. Zone 22 included modern-day Turkey, and it was there, in the Kadikoy district in Istanbul, that a soldier named Demir, his girlfriend Erbu, and the mysterious Inzar have began a rebellion that may save the rest of humanity from the Order's followers, who began rapidly mutating into the monstrous Maduns...

Compare to Inner Chains, a 2016 Polish horror-themed First-Person Shooter with a similar premise.