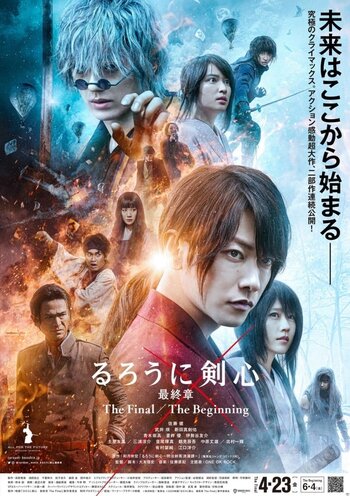 Himura Kenshin (Takeru Satoh), along with Kaoru Kamiya (Emi Takei) and his friends, now live in a different Japan where fashion and technology are becoming more modernized. But the leader of the Shanghai mafia, Yukishiro Enishi (Mackenyu Arata), takes advantage of this to try and fulfill one simple goal. When the Bakumatsu took place, trust and betrayal led to the death of his sister, Yukishiro Tomoe (Kasumi Arimura) by Kenshin's hands. With this loss, Enishi takes matters into his own hands by attempting to tear apart every facet of Kenshin's life. Now, with the past reopened, and his loved ones now at stake, Kenshin must do everything he can to conquer his inner demons, to truly move forward again.

♫ I’m here for you
Are you here for me too?
Let’s start again
We could be the renegades! ♫