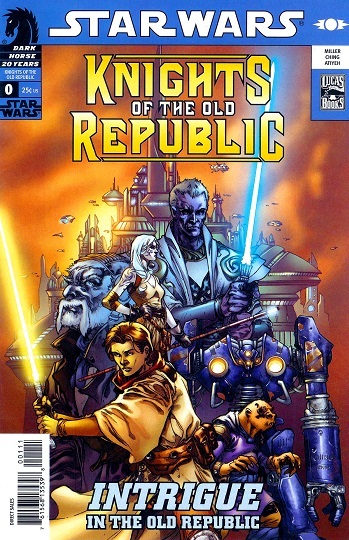 Hated by the Republic, hunted by the Jedi — a Padawan on the run.
It is a time of upheaval for the galaxy.
Nearly four thousand years before
the birth of Luke Skywalker, the
Mandalorian Wars have strained
the OLD REPUBLIC's resources
to the breaking point.

With so many Republic forces at the front,
systems in the Outer Rim teeter
on the edge of lawlessness — even the
city-world of TARIS, which was once
a thriving commercial center. Here, as
elsewhere, the Republic relies increasingly
on JEDI KNIGHTS and their students
to help maintain order.

But some Knights, frustrated with
the conduct of the Wars, argue for a more
active Jedi role, appealing to others
for support. Even from those Jedi —
and their untried students — who are struggling
to maintain order at home…
Advertisement:

Star Wars: Knights of the Old Republic is a monthly comic book series published by Dark Horse Comics which ran for 50 issues, from January 2006 to February 2010. It is part of their 20th anniversary retooling of its long-running Star Wars series. It takes place in the same timeline as the video games of the same name, eight years prior to the first game.

The Knights of the Old Republic comic stars Padawan Zayne Carrick, a notorious screw-up who the Jedi Council wrote off as only having a "marginal connection to the force." Nonetheless, he joined a group of four other Padawans being trained by a group of five Masters on Taris. When the day of the Knighting ceremony comes, Zayne — already late and doubting he'll be knighted — decides to stop on the way so he can finally capture his criminal rival, the Snivvian conman Marn "Gryph" Hierogryph.

However, when he finally arrives, he is greeted by a ghastly sight — his fellow students slain by the Masters, who quickly turn their sabers on him. He escapes, barely, with Gryph's help, only to find that the Masters have framed the duo for the murders, claiming that Zayne has become a Sith. Hoping to escape the planet and find evidence to clear their names, Zayne and Gryph join forces with a crazed but brilliant Arkanian Off-Shoot named Camper and his beautiful bodyguard Jarael, travelling across the galaxy to unravel the mystery behind the Padawan massacre.

A five-issue mini-series sequel was produced in 2012 by the original writer, called Star Wars: Knights of the Old Republic: War. The story begins with Zayne Carric making a stop at his homeworld on the way to visit his family on Dantooine, only to find out that, having been born there and no longer being an official Jedi, he's eligible for the draft. Soon enough, he's forced onto the front lines of the Mandalorian Wars, and must find a way to survive while keeping to his pacifistic morals.

Tropes found in KOTOR are: