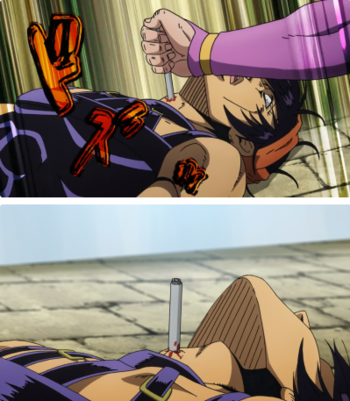 Sometimes this is used to establish that a character has medical training. Sometimes a note of drama is added because the character performing the techniques does not have the training, but usually he's being talked through it by someone who does. Like other Hollywood medical techniques, this often goes smoothly and without complications...even when performed by non-doctors.

On TV and in movies, this procedure commonly consists of stabbing someone in the throat using a ball-point pen with the ink tube removed. In real life, it would be quite difficult to use an empty pen to break through the skin and internal tissues all the way through to the airway, and you can't just jam it in anywhere. People were tested on their ability to do this,

and only one out of ten participants was actually able to get the pen in the right spot and deep enough; it should be noted that this also took over five minutes, more than long enough for someone to suffocate. But if you know where to aim, and use a knife to make an incision first, a pen can indeed act as an improvised breathing tube.

Supposedly, this has led to idiots trying this on people who collapse for reasons that have nothing to do with breathing. This is obviously something you do not want to do without the kind of training that results in a medical doctorate degree. A procedure as drastic as a tracheotomy should only be used as a last resort, since it basically boils down to slitting someone's throat, which can obviously make things worse if performed incorrectly. If it's at all possible, you shouldn't do this until after you've called an ambulance and are sure that it's an appropriate measure to take.

It's worth noting that in most cases, what the characters perform is not actually a tracheotomy but a cricothyrotomy.

Not to be confused with an Impromptu Tracheotomy, which is stabbing someone's neck as an attack.