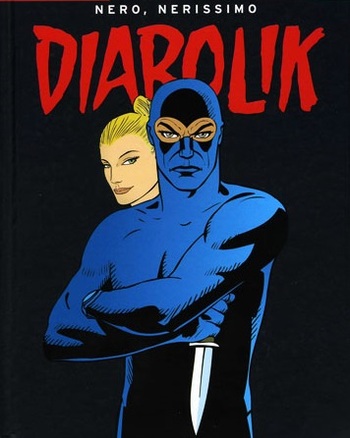 Diabolik is the eponymous Anti-Hero of a long-running series of Italian comics, created by sisters Angela and Luciana Giussani in 1962. His stories appear in monthly black and white digest-sized booklets. The character was inspired by several previous characters from French and Italian pulp fiction, primarily Fantômas.

Diabolik is a ruthless master thief, who was raised as an orphan on the secret island hideout of a criminal combine. There he learned many of his lethal skills, before killing the head of the organisation and escaping. His true name had never been revealed in the series, and he doesn't know it himself, having taken his alias from the name of a dangerous black panther that lived on his childhood island home.

In his early appearances, Diabolik was a straightforward villain who did not hesitate to murder anyone in order to accomplish his crimes, but was later shown robbing and killing mainly criminals and other "unsympathetic" types, in order to soften his violence and amorality. From the third issue of the series, Diabolik has been aided by his assistant Eva Kant, who has gained an increasing role as his partner and lover. Throughout his adventures, he is pursued by the relentless Inspector Ginko.

Diabolik seems to have a deep knowledge in many scientific fields, including chemistry, mechanics and computers. He creates all sorts of gadgets, especially disguised weapons and communication devices, has developed a range of truth-serums and mind-control drugs, and creates perfect life-like mask disguises.

Note: Diabolik served as a major inspiration of Paperinik, the Italy-created superhero alter-ego for Donald Duck, who originally was only a slightly Lighter and Softer version of Diabolik that still didn't care about law and morals, but due to Executive Meddling became a real superhero and became a Diabolik Expy "In Name Only".

The Diabolik comic was adapted as the campy film Danger: Diabolik, and also an animated television series (produced by Saban Entertainment for the international Fox Kids networks, with animation by Ashi Productions and Saerom) and a video game adaptation.

The franchise had to wait December 2021 to get a proper film adaptation of the franchise. Appropriately enough, the 2021 seems to consider Diabolik's true Origin Story issue #3 of the original comic, when Diabolik fully sheds his Walter Dorian alternate persona and gains Eva Kant as his ally and lover, considering the first issue nothing but Early Installment Weirdness (as most of the fanbase already does).