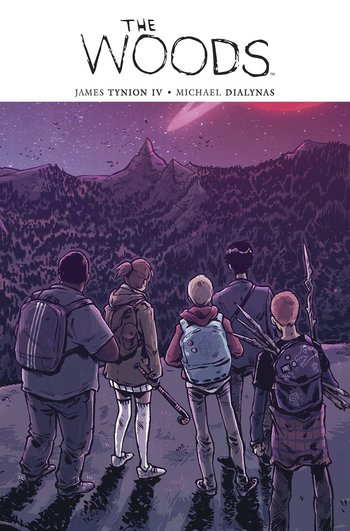 On October 16, 2013, 437 students, 52 teachers, and 24 additional staff from Bay Point Preparatory High School in suburban Milwaukee, WI vanished without a trace. Countless light years away, far outside the bounds of the charted universe, 513 people find themselves in the middle of an ancient, primordial wilderness. Where are they? Why are they there? The answers will prove stranger than anyone could possibly imagine.
Advertisement:

The Woods is a comic book series launched by Boom! Studios and written by James Tynion IV and Michael Dialynas. After a high school is suddenly transported to an alien moon, six teenagers try to find a way home while battling various obstacles and creatures living in the woods. The comic focuses on seven main teen characters: Adrian Roth (smart-alec who thinks he's above it all), Karen Jacobs (a girl Desperately Looking for a Purpose in Life), Maria Ramirez (a take-charge Go-Getter Girl), Sanami Ota (resourceful Deadpan Snarker girl), Calder McCready (Class Clown always getting into trouble), Issac Andrews (anxiety-prone theater geek) and Benjamin Stone (a Gentle Giant of a teenager nursing a crush).

The comic is also notable for featuring quite a few LGBT characters and themes and won the 2017 GLAAD Media Award for Outstanding Comic.

The series concluded it's run in 2017 with issue #36. Syfy began production of a film adaptation of the comic in 2013, but the project is in Development Hell.