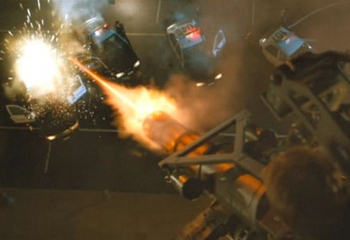 Often in fiction and even sometimes in nonfiction when the police and crooks start a firefight, the criminals will have more powerful guns. They'll be wielding automatic weapons, and sometimes even explosive ones. As for the cops, they'll be forced to fight back with pistols.

The reason for this trope can vary. Sometimes its because its based on historical times when crooks were better armed than police or when criminal organizations like Mexican Cartels started hiring ex-special forces for muscle like Los Zetas. Sometimes it implies that the law enforcement is held back by Honor Before Reason; they could do better against crooks if they'd use more deadly guns, but at the cost of looking like an occupying army. Police might also be restrained by the increased risk of collateral damage to innocent bystanders if they resort to high-powered or rapid-fire weaponry. Other times it can seem like a critique against the United States' Second Amendment; why do we let the public gain such dangerous weapons legally?note In reality, military-grade ordnance like fully automatic weapons and explosives are not outright impossible for U.S. citizens to own, but lawful ownership is very, very strictly regulated, to the point that they might as well be banned to those without a lot of money and a very high tolerance for miles of red tape. Even getting them illegally would be an absurdly difficult task for your average street thug At its core, though, it's ultimately a way of increasing the stakes, so that the viewer roots for the underdogs.

Contrast The Lopsided Arm of the Law, where the police say they're powerless to deal with criminals, but have plenty of firepower that they seemingly forget to use until the hero rallies them. Also contrast Does Not Like Guns, another way to make the heroes underpowered.

One of the signals that the work is set on an Urban Hellscape. See also Offscreen Villain Dark Matter, when it comes to crooks having inexplicable access to weaponry and equipment far more effective than would realistically make sense for them to be able to obtain and/or afford.

Compare The Enemy Weapons Are Better.